Yui Kurata is the Trinity Seven of the Avaritia Archive and a Cardinal class mage, making her second only to the Biblia's Headmaster. Originally sealed away in a dungeon, she has since been saved by her friends and Arata, becoming a close ally and friend.

Yui has a very happy and bubbly personality, which often makes her seem childish at times. As such, she is very open with her thoughts, almost always expressing her feelings vocally and physically. For most of the time, Yui is usually excited and joyful, remaining cheerful in even the tensest and dangerous circumstances. Additionally, she rarely holds grudges and thinks ill will of others. After being saved by Arata, she remained friendly towards Mira, who previously was willing to kill her in order to stop her Breakdown Phenomenon. However, her mood can also easily shift depending on the situations, becoming frustrated when things do not go her way or becoming scared when confronted by something she is afraid of. Ironically, Yui is quite frightened by ghosts but finds the monsters are cute. Yui is very friendly and easy to get along with, but notably, due to being placed in the school dungeon alone to sleep, she does not have many friends or close relationships. With the exception of the other Trinity Seven members, specifically Levi, she has remained relatively isolated from people until meeting Arata, whom she has become very attached to. Since then, Yui has become more interactive with her friends, happily playing and enjoying their company. Additionally, she can also be fairly mischievous and daring, often times teasing her friends which she greatly takes delight in. Ordinarily, she is not shy about her body, making suggestive remarks or acting boldly, particularly towards Arata. On one occasion, she independently slept naked in his bed with him. Yui cares very deeply for her friends, willing to fight and protect them from harm. During Iscariot's attack on Biblia, after Levi was defeated by Lugh, she was determined to go and fight by herself, becoming tearful and unwilling to let Levi shoulder the burden by herself.

Yui has also been known to be serious and mature at times. In her first meeting with Arata as her dream form, she acted in a polite and refined manner, helping him discover his Thema. During battles, she can become determined and focused, often times she will support her friends or actively fight herself. Although, she continues to remain friendly and cheerful, even against enemies. Particularly, she has very good teamwork, using her magic to bolster and cooperate effectively with her allies. In the Biblia Magic Research Showdown, Yui, together with Arin, were able to pressure Arata and Lieselotte for the majority of the match, and eventually defeat them to win.

As she disregarded and isolated herself from others her research Thema is Amicitia (Friendship) of the Avaritia (Greed) archive. In the fight against Farfarella, despite being saved, Mira is scared of her. Knowing that Yui's theme is Friendship, Yui actually doesn't care even if Mira is actually killed and not just from illusion.

She revealed to Arbariccia during their fight that she doesn't have friendship because she is not real. In her Last Crest, Yui is shown sleeping and dreaming in her own dream world, and she herself is not sure if her dreaming self is not itself another dream, that continues infinitely. Likewise, the world where she is a Trinity Seven could also be just another dream.

To her, the only thing she believe to be real is Arata.

Yui is a well endowed young woman with shoulder length grey-white hair with a single ahoge. Possessing the Phantom Cross eye, giving her distinct yellow eyes with cross-shaped pupils that can change color. Her hair is normally tied into pigtails held together with pink ribbons, along with three pink heart-shaped hair clips on her bangs.

Some time after Arata departed to train at the Royal Arkasha Academy, Yui began to styling her hair into pigtails fastened by dark bands.

She generally wears her school uniform, which consists of a white collared shirt worn under a dark blazer jacket with cuffs and the school insignia on the left breast pocket. The lower half includes a plaid mini skirt, black dress socks, and brown loafers.

Magus Mode: Yui wears a white, sleeveless collared tail blouse with white laces on the bottom hems. Additionally, she now wears opera gloves with white cuffs that are pink from the arm to the wrist and black onwards to the hands. She also wears the same plaid mini skirt and brown loafers, but with white cuffed ankle socks worn over her long black thigh highs. Lastly, Yui also wields a white conductor baton in this mode as well.

Dream Form: In her dream form, Yui transforms into an idealized older version of herself, becoming taller and her bosom also notably grows bigger. Furthermore, her hair grows longer as well, now covering her back. Originally, she had her bangs tied together with a rubber hair band and did not have her three heart shaped hair clips. However, since then, she currently styles a small ponytail on her upper left side with the heart shaped hair clips. 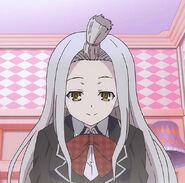 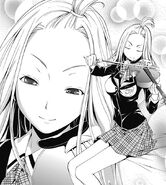 Due to her immense magical abilities, Yui was sealed by Master Biblia in a dungeon under the Royal Bilbia Academy where she would sleep and research in her dream world.

One day, Yui is visited by a young girl named Levi who asks if she wants to be friends in the real world. Upon bringing Levi into her dream world to discuss, Yui is initially disinterested in the idea of friends and the outside world due to them being unnecessary. Nevertheless, Levi manages to entice her curiosity by explaining the fun and useful purposes of friends. Formally introduce themselves to one another, the two become friends.

Afterward, Yui would occasionally be visited by Levi in the dungeon, but otherwise, she remained isolated from the outside world.

Arata met her when she saved him from being killed by Akio to stop the breakdown phenomenon. She pulled him into the dream world at the last moment. There she introduced herself and explained to him what archives and Themas were.

When Arata met with her, the power of the magic king affected her. Causing the entire school to go to sleep as part of a Breakdown Phenomena.

Yui's Thema is Amicitia from the Avaritia archive, and her magic is Arc Symphony. As a Cardinal class mage, she is one of the strongest mages in Biblia Academy, being second only to the Headmaster. However, because of her immense magical powers, if left unrestrained, she becomes capable of creating a Breakdown Phenomenon that can put the entire world to sleep and eventually destroy everything. During her own Breakdown Phenomenon, a dragon, considered to be a very high-level monster, would even appear. As such, she was originally sealed away in a dungeon under the school by the Headmaster where she slept and lived in her dream world.

Yui's Arc Symphony grants her the ability to create her own world and control any aspect within it. Inside her dream world, she is able to use her full power such as altering dimensions, creating different types of monsters, allowing access to her world and even change her own appearance to an idealized version of herself. Although, if she becomes upset, she cannot maintain the image and temporarily reverts back to her true form. Furthermore, she can directly effect affect the real world as well, such as physically pulling people into her dream world, directly communicate or project an astral image of herself in the real world to support her friends and allies. Her ability is powerful enough to drag people into her dreams without them realizing. While Arc Symphony is not entirely suited for direct combat, Yui especially excels in defense, support, and buffing magic, putting her magic in a different class of its own. Using Arc Symphony, she can greatly increase Akio's Mantra Enchantment power or even enhance Arin's Chaotic Rune to achieve the Trinity. As such, her support magic and good teamwork make her an ideal partner in battles. Yui's defensive magic allows creating barriers that can block both physical and magical attacks. She is also capable of creating a large barrier strong enough to protect even a stadium of people from a Breakdown Phenomenon. Yui has also been shown to be able to remain mostly calm in dangerous situations. Moreover, Arc Symphony even allows her to stabilize rampaging magic such as Selina after she had her magic stolen by Lieselotte.

Additionally, Yui also has the ability to summon monsters indefinitely to do her bidding and instantly create large barriers that replicate her dream world in the real world. In particular, her barrier is said to contain an enormous amount of magic that not even Lieselotte is not able to fully analyze it and even amaze Ilia. As long as she is within her barrier, Yui is able to use her full strength and perform spells similar to Arata's world reconstruction magic. This allows her to hold her own in a fight despite specializing in support magic. Yui has also demonstrated the ability to conjure musical pieces that can physically bind and constrict an opponent

Although Yui does not possess high physical abilities, she can render her opponent asleep with a single strike. Also, as a Cardinal Class-mage, she is strong enough to beat 2 members of Malebranche in an instant. Although, this is also boosted by the nature of magic power in Dante's Gate that gives more power to those who does not desire it, and Yui's archive, Greed, fits it.

As a possessor of the Phantom Cross Eye, Yui has the capability to send anything into a riff between dream and reality.

In her dream world, she witnessed Arata and the other Arbitrator fight the Nornil Giant Pillars in her sleep. Arbariccia who is still trapped inside, noted due to her immense magical power she can even show images of the battle.

Outside of magic, Yui is also a skilled violinist.