Selina Sherlock is the younger sister of Lieselotte Sherlock of the Trinity Seven and a student reporter in Royal Biblia Academy.

Selina looks much like Lieselotte Sherlock (Selina's older sister) as they both have the twin tails hairstyle. The only differences between the girls is:

Due to her energetic personality giving the impression she just can't stand still her Thema is Ligare (Bind) of the Acedia (Sloth) archive. Like Lieselotte Sherlock (Selina's older sister), Selina is a user of the Logos Arts.

Selina is able to use healing magic to bind wounds and stop bleeding. She can take a photograph to bind the blood and pain to stop the bleeding as well as speed up the recovery time.

Selina was able to use her camera to interrupt the suspended world Liese was in. So she could bind Liese to her body.

Archytas Replicator - This grimoire takes the form of a camera that Selina points to where she wants to use her macro. The camera wasn't originally a grimoire but a magical vessel, when Lieselotte was attacked by Anna's knight, understanding that her sister was in danger, the camera turned into a Grimoire.

After her training with Aries Cardia she evolved into a new form as well as the access of the Melancholy Archive.

Lieselotte Sherlock - Lieselotte is the older twin sister of Selina where Lieselotte cares deeply for her sibling and Selina vice versa. After Lieselotte's sudden disappearance, Selina would continuously worry about her, even hoping that Arata Kasuga might be able to save her. However, in an unfortunate twist of events, the two would initially reunite as enemies. While delighted to see Selina again, this would not stop Lieselotte from stealing her sister's magic, as well as endangering her life in the process. Nevertheless, Selina would not hold a grudge against her, understanding the kind of person her sister was and still remained loving towards her, even if sometimes she was frightened by her sister's change. Remaining determined to bring her sister back, Selina would request she return if Arata defeated her, although Lieselotte would sadly decline. After Lieselotte became trapped in the motionless world, Selina would sadly, but determinedly resolve to save her sister. Eventually, Selina would temporarily bring her sibling back by using her body, happily working together to defeat Iscariot. Since then, the two have continued to remain close together, particularly after Lieselotte was saved by Arata.

Being the older sister, Lieselotte enjoys teasing her and is always watching out for Selina, willing to fight and protect her family. Notably, her actions were later strongly implied she actually intended to save her sister from the inevitable destruction of the world that Arata, along with herself and the Trinity Seven, would cause.

Arata Kasuga  - Selina is one of Arata's classmates and good friend in Royal BIlbia Academy. Upon transferring to Biblia, she was one of first few people he meets, accidentally bumping into him while announcing his arrival as a Magic King Candidate. Afterward, Selina would initially interact with him to get a scoop for her news article, however, they quickly got along with each other, being able to easily talk to one another. But while they do enjoy each other's company, she is also occasionally shocked and embarrassed by his perverted habits, sometimes having to be the voice of reason. Regardless, Selina found him to be interesting due to his magic abilities and relationship with the Trinity Seven. After Arata helps rescue Yui, she even begins to hope that he can save her sister Lieselotte. During Lieselotte's return, Selina helps save Arata avoid her sister's attack. When Lieselotte eventually steals her magic and her life becomes in danger, he showed great concern for her safety and became motivated to stop Lieselotte. Later on, they would work together to liberate Lieselotte from her frozen world. Overall, they care for one another as friends, willing to support and fight for each other.

Aries Cardia - Aries was the person who trained Selina to become an Arbitrator, however Selina lacked the understanding of the Archive and Thema. Aries encouraged her even calling Arata to help. Aries sticked with Selina to the very end, despite being the last candidate to become Arbitrator. Aries has taught her many things, to which Selina is grateful for. Selina would eventually gain access to the Melanchony Archive which was one of the lost Archives thanks to Aries guidance and training. They both share a good friendly relationship. 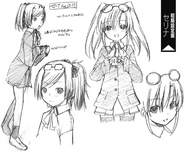