Ryuhime Kashin is the leader of the Wu Xing Shadow Ninja Force, as well as a former candidate for the Trinity Seven of Invida and acquaintance from Levi's past. The two would reunite after coming into conflict over the Mythical Weapon Murasame.

Ryuhime has a confident and competitive demeanor, often finding opportunities to declare or display her capabilities, particularly towards Levi. Nevertheless, despite her self-assertiveness, Ryuhime will still acknowledge those with strong abilities, being aware of their strengths. However, her attitude can quickly become apprehensive or disturbed upon encountering an unexpected situation, although she usually recovers her composure.

Ryuhime is a young slender girl with long light hair adorned with a star hairclip on her right bang and a small dark garrison hat on the opposite side. Ryuhime's attire consists of a dark collared blouse with a cravat tie and short skirt with ruffles on the bottom held by a large belt, along with a dark cape. Additionally, she also wears dark thigh high socks and boots.

Notably, when she invokes her magic, a seal of a dragon appears on her right hand. 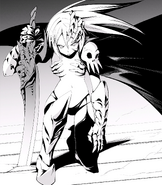 Ryuhime while using by Murasame sword

After capturing Charme, the Wu Xing Shadow Ninja Force ambush Levi who had tracked Charme to their location. While Levi barely manages to avoid the onslaught, she recognizes their identity due to the nature of their magic. Nevertheless, Ryuhime remains confident before introducing herself and declares that she will defeat Levi.

Ryuhime is seen sneaking inside the Demon King's castle. After Deus Trinity is awakened, she appeared, bringing Murasame, and give Arata a clue for Arata to be able to win against the True Demon King.

As a wielder of the Dragon Orb magic from the Invidia Archive, Ryuhime can interfere with the world by controlling the five elements of the dragon, becoming capable of even splitting dimensions. Possessing the element of gold, she can also utilize the remaining elements, wood, fire, earth, and water, through each of her subordinates whom she accesses through the talismans she maintains on her hat.

Formerly a candidate for the Trinity Seven of Invidia, Ryuhime's strength has been noted to nearly equal against other Invidia mages such as Levi and Lugh. Furthermore, she is capable enough to single handily defeat a Code D Dragon.

Ryuhime possesses four talismans that she maintains on her person, usually on the brim of her headwear. Each talisman corresponds to one of the remaining members of the Wu Xing Shadow Ninja Force whom she can summon.