Okto is a younger sister of Ilia, and the Eighth Chapter of the Ilias Fragments. As the only survivor after Radix Astil's assault that killed her master, the Witch of the West, and sealed her sisters, the grimoire would eventually meet and guide Ilia and her sister's master, Arata through Dante's Gate.

Okto has a cordial and considerate disposition, caring deeply for her family's safety especially after the death of her master and capture of her sisters. Nonetheless, she continues to behave in a thorough and friendly manner when interacting with others, even once after sending demons to assault arrivals at Dante's Gate in order to evaluate their strength.

Okto is a young slender woman with long hair, her features resembling an adolescent version of her elder sister Ilia. The grimoire typically wears a hairband and styles her hair with small pigtails. Her attire consists of a white dress worn under a long sleeve light robe with a hood.

Okto, along with Ilia and her sisters, manisfested after their master, the Witch of Witches gathered them to become the Chapters of the Ilias Fragments.

Three hundred days before Dante's Gate's opening, Okto witnessed Radix Astil's arrival who then murdered the Witch of Witches before sealing her sisters within crystals. As the last remaining Chapter, the grimoire could only wait within Dante's Gate for support in hopes of rescuing her siblings.

Upon Ilia and her party's arrival, Okto secretly summons an army of demons in order to evaluate her sister's Arata Kasuga's strength which he easily dispatches the leader. Impressed by the Demon Lord Candidate, the grimoire then reveals her presence, happily reuniting with Ilia who introduces her to the members of the group. Although Okto feels guilty about conjuring the army and attacking them, Arata and the others nontheless forgive her actions. Furthermore, the grimoire recognizes Arata's strength and considers him capable enough to survive within Dante's Gate. However, when Ilia questions her about the status of the remaining sisters, Okto tearfully requests that she and her master rescue them.

Later, Okto guides the party through Dante's Gate, explaining the general structure of the world, but Ilia insists that she explain their sister's situation. Okto then reveals that their sisters have been sealed within the various levels of Hell, as well as the death of their master by Radix Astil. As Arata questions Okto about Radix's reasoning, the culprit herself suddenly appears before the group and explains her motivation to use the sisters as a trial for the Demon Lord Candidate. However, Okto then witnesses Arata utilizing his magic to dominate Radix, prompting the perpetrator to retreat.

After getting separated, she was left with Akio to deal with Melacoda.

Okto possess the ability to summon an army of demons to attack her enemies. However, if the leader is defeated, the remaining members will disappear. 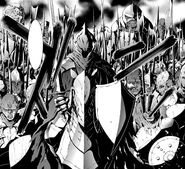 Arata Kasuga - Prior to their initial encounter, Okto summoned a demonic army to confront Arata upon his arrival into Dante's Gate in order to evaluate her sister's master's strength. The two would then meet after he incompacitates the demons, although she was initially hesitant due to her actions. Nevertheless, Arata would quickly forgive Okto before requesting her opinion of his skills which Okto readily approves. Subsequently, the grimoire would also implore his assistance in rescuing her sisters which the Demon Lord Candidate would later agree.

Ilia - As the Eigth Chapter of the Ilias Fragments, Okto is considered as a younger sister to Ilia. Although the two were separated for an unknown amount of time, the sisters would happily and cordially reunite within Dante's Gate. While Ilia can be exasperated by Okto's punctiliousness, the grimoires would agree to cooperate in rescuing their remaining family members within the Gate.

Mina Salem- The powerful being known as the Witch of Witches that wrote the 9 chapters of the Ilias Fragment, she is technically the "mother" of Okto and Ilia.