Mira Yamana real name Amano Kagami is the former Trinity Seven of the Superbia Archive, as well as the Head of Grimoire Security. Due to her nature and role, she is initially hostile towards Arata after his transfer to Biblia, but eventually accepts him as an ally and friend.

Mira is a serious and driven individual, having a very passionate belief in justice. Dedicated to her role as the head of Grimoire Security, she can be quite cold and ruthless sometimes. In order to stop or prevent a Breakdown Phenomenon, she will not hesitate to take a life in order to complete her mission. Because of her strong sense of responsibility, she normally has a no-nonsense attitude, appearing unfriendly and strict most of the time. Furthermore, Mira greatly dislikes anything or anyone she considers impure, becoming agitated or even greatly embarrassed in some situations. However, she has shown some concern about her role as Grimoire Security, feeling conflicted about the dark nature of her job. Despite this, she remains determined to fight against impure existences. Mira has also been shown to be a very capable leader and fighter, usually remaining calm and collected during dangerous conditions. This allows her to act and think intelligently, planning her moves ahead to avoid trouble.

However, underneath her stern exterior, Mira can be a very kind and caring girl. Notably, before becoming the head of Grimoire Security, she was initially someone who could not express and assert herself, being very shy and distant with everyone. As a result, she became very isolated from the school until she met Akio who inspired her to change. While she rarely shows this side of her anymore, since meeting with Arata, she has become more mellow and honest with others. Additionally, Mira is quite pure, becoming very unnerved when anything perverted happens, sometimes even reacting violently. As such, this has been exploited as a weakness many times. However, since interacting with Arata, Mira has become more accustomed to perverse situations. Particularly, when she loses her clothes, she reverts back to her original personality, becoming very meek. Although Mira is often considered a genius, she herself has never thought of herself as one. However, she nevertheless has pride in her magic and strength. Overall, Mira cares deeply for her friends, willing to fight and protect them. Although she is usually surprised or distressed by many of their antics, she continues to enjoy their friendship.

Upon becoming a True Hero, quitting the Trinity Seven. As her best friend, Akio was worried about her. Akio hugs her our of concern. She was happy that she is worried about her and giving her a smile as she made up her mind, even informing her, her real name. Also because of her kindness, Mira will remember Akio even if her soul is altered.

Mira later reverts to her original old personality, where she hates impure things. As a True Hero and an Arbitrator, she considers her missions top priority and have strong sense of justice. Deus Trinity noted that even though she's an Arbitrator that can connect to the Justicia of Cloud, it is terrifying that she still retain her original conscious and mental state. However she still can be become shy if teased, she is also polite, asking her friends if it's alright being around them even though she's not a Trinity Seven anymore.

Mira is short, slender girl with long blond hair. Her hairstyle is mostly short all around with her bangs swept to both sides, along with twin ahoges on top of her head. A portion of the back is grown much longer, reaching all the way to her legs. Lastly, she has a small red ribbon tied to the right side of her hair.

Mira's daily attire is usually her school uniform which consists of a white collared dress shirt worn under a dark blazer jacket with the school symbol under the right breast,  and a plaid ribbon tied in a cravat knot around her neck. Additionally, she wears a plaid mini-skirt, black dress socks, and brown penny loafers.

After exhausting her magic during her match against Anastasia-L and Arsha, Mira's vision deteriorated, requiring her to begin wearing glasses.

Some time after Arata departed to train at the Royal Akasha Academy, Mira began to braid her hair into a ponytail tied with a ribbon.

After becoming a True Hero, Mira has gained angelic wings, she no longer wear glasses. She doesn't use her Grimoire anymore.

Magus Mode: In her Magus Mode, Mira's attire does not change, except with the addition of a white cape. 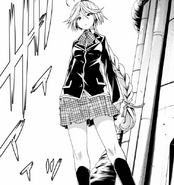 Mira as a True Hero

Prior to joining the Trinity Seven and becoming the head of Grimoire Security, Mira used to be someone who could not assert herself as she was relatively withdrawn. Despite her talent, her high magical powers caused her to be afraid of losing control and hurting someone. As a result, she avoided associating with anyone, causing everyone else to stop approaching her as well. Even with Lilith's attempt to help, Mira would continue to remain isolated. However, upon meeting Akio who came to her and took her hand, Mira would slowly begin to change and open up.

Already a member of Trinity Seven back then, Akio would drag Mira everywhere with her, giving her a wide range of diverse experiences. On one occasion, after a failed experiment caused her to faint, a concerned Akio would carry Mira on her back. During that moment, Akio would tell Mira that since she was lucky to have been granted such an immense power, she could possibly use it to change herself. Akio's words from that time would have a huge impact on her. Hoping to become honest and stylish like Akio, Mira was then influenced to become an ally of justice, a person who would take responsibility for her own power.

Eventually, Mira would become a Trinity Seven, as well as the head of Grimoire Security.

As part of a Grimoire Security mission, Mira, along with Akio and Lieselotte, travel to an average rural city in America to investigate a potential Breakdown Phenomenon. Despite their initial investigation yielding no results, they are assaulted at midnight in their hotel rooms by the locals who have become living corpses. However, the girls easily fend off their attackers, as well as discover that a Gula Breakdown Phenomenon which occurs after midnight is the cause. Locating the source to an abandoned church, they find an undead sister continuously praying and casting a spell, causing the Breakdown Phenomenon. Afterward, Mira vanquishes the sister, although the experience leaves her uncertain. Nevertheless, after some encouragement from Akio, the three begin heading home.

Mira's Thema is Justitia and her branch of magic is called Gehenna Scope from the Superbia Archive. Gehenna Scope enables her the ability to analyze and reflect magic, giving her very high offensive and defensive capabilities. Mira can scan an opponent's magic, allowing her to pinpoint their weakness and create a counterattack. However, this process can sometimes take a while, which requires someone else to run interference. Because she can also reflect magical and physical attacks back to her opponent, Mira is nearly invulnerable. Most notably, she was able to reflect Arata's stripping magic, causing him instead to become stripped. However, Mira's defense is not entirely perfect, only able to partially protect herself from Lieselotte's Demon Lord Candidate spell. Nevertheless, Mira has since been able to bolster her defense, creating multiple barriers or multi-layered aria capable of blocking even a Demon Lord Weapon. Another implementation of her barrier allows her to place one in an area that will cause a combustion should someone attempt to enter.

Mira can also utilize Gehenna Scope to scan a large amount of space for magical disturbances and even recover her magic inside of a pool by substituing the water as her crystal.

Additionally, Mira's experience and talent allow her to remain calm in most dangerous situations, helping her fully utilize Gehenna Scope to its full potential. She has also been shown to be a skilled tactician, able to predict and prepare for her opponent's next moves. During her team battle against Akio and Levi, Mira foresaw that Levi would attempt to exploit her feelings for Arata, using that moment to seal Levi's movement. However, she is weak against perverted concepts due to her pure nature, a shortcoming that Ayesha once attempted to exploit. Although, Mira has since overcome her inexperience due to her interactions with Arata.

Another skill Mira has displayed with her magic includes neutralizing magic, once destroying a Breakdown Phenomenon by countering with equally destructive magic. She is also able to freeze opponent's movements, temporarily paralyzing Arin and Lilith's movement as well. Moreover, Gehenna Scope allows her to perform magic without any tools. However, since the Royal Liber Academy mission where she was unable to use her magic, she has started to save money to buy magic tools to avoid the same situation. Furthermore, after studying Arata's magic, Mira is able to cast anti-spells, rendering any opponent's magic defense useless. Mira is also capable of forcibly removing her opponent's magic such as cloaking spells.

Due to her high magic levels and skills, Mira has been described as the most talented of the Trinity Seven, although she has never considered herself as such. Regardless, Mira is skillful enough to even defeat Arsha, a Paladin magus.

In spite of her role as a Trinity Seven, Mira is also a Hero Candidate, the opposite of the Demon Lord, who protects the world. If Mira can awaken her ability as a Hero Candidate, she could fight against the current Deus Trinity in his weakened state. But to be fully awakened as Hero is becoming part of system to dispose all threat to the world, regardless if it means she will have to kill Arata too.

Ayesha described Hero Candidate as "Someone who shoulder the fate to endlessly fight Demon King or Evil Gods who threaten the world no matter how many time". In practice, a Hero's ability is to revive, to challenge evil again and again.

As her training, Ayesha will kill Mira repeatedly using her swords. Mira revived from her first death after 12 hours, but Ayesha give target that she can revive instantly against any kind of death. It's either Mira mastered the ability or her mind breaks down from the trauma.

After Aetheria Akasha agreed to train Mira more to be a complete and better Hero Candidate upon her daughter's Ayesha's request, she must quit being one of the Trinity Seven.

After Mira becomes a True Hero, she's no longer a Trinity Seven and she lost her Last Crest. She gained new powers instead, powers that are the symbol of absolute justice, pure power that destroys both gods and demons. She also gained a new Thema. However this new power comes at a cost since it can separate both her body and soul. She is now one of the four cardinal virtues of Justice, which is her seat of her soul.

She lost her Superbia Archive. With her new Thema it was powerful enough to electrify the whole Arbitrator Tower building, using only one hand. As well as she can coat her body with electricity when using her Thema.

Mira has gained a new ability to control Einferia army, that of which capable of annihilating an army of Nornil Giant Pillar in mere seconds. She also grows angelic wings, which is revealed to be her true form, and allows her to fly.