Lugh is a thief who possesses three legendary treasures, as well as a member of Iscariot opposing the Magic King. Initially appearing during Iscariot's assault on the Royal Bilbia Academy, Lugh has since become both an enemy and occasional ally to Arata and the Trinity Seven. She often greets Levi by crossing blades with her, which has happened on at least 3 separate occasions.

Lugh is a very candid and nonchalant young woman who often appears emotionless, although not quite to the same degree as Arin. She herself has noted that she has never been good at expressing emotions. Furthermore, she can be quite incongruous and oblivious to current events. After Levi craftily used a hoax of her Final Spell, Lugh would not realize Levi's deceit until after Master Liber revealed that she had been fooled. Nevertheless, Lugh is dedicated and loyal to her goals and allies, willing to fight and support them in dangerous times. She has shown genuine concern toward her comrade Hijiri, once defending her against an attack from Akio. Moreover, Lugh has even aided her enemies, choosing to continue supporting Arata in his clash against Abyss Trinity.

However, despite her seeming impassiveness, Lugh has displayed various emotions on certain occasions, such as becoming embarrassed in perverse situations. Following Arata accidentally falling on top of her and touching her left breast, she was quite flustered and even more surprised after he ignored her afterward. Additionally, as a thief, she has a great love for treasures, able to sense them even if their presence is hidden. Lugh would even become willing to marry Arata so she would inherit his treasures as his wife. She has also been shown to have a mischievous side, sometimes acting in a crafty and humorous manner. In once instance, she would attempt to defeat Arata after defeating the patrollers in Sky Library as promised.

Lugh has a great deal of confidence in her combat abilities, even ranking herself as the second strongest person in the world. Throughout battles, she usually remains as her calm self, able to quickly ascertain enemies' aptitude, as well as decide on the best course of action to fight. After being trapped by Selina and Lieselotte's magic, she would choose to break one of her legendary treasures to escape as her better option despite the decrease in strength. Lugh can also be quite ruthless sometimes, willing to use extreme and violent force to defeat her enemies. During her assault on the Royal Biblia Academy, she would significantly incapacitate Levi causing serious damage, as well as nearly killing Selina. Due to her great strengths, Lugh can be arrogant on some occasions, however, she can also be greatly surprised by unexpected events.

Lugh is also power hungry who is obsessed for Judecca and wanted to wield the sword. When she was unable to wield, she is determined to become Arata's wife in order to use Judecca.

It was revealed that Lugh enjoys shibari play, as she got excited over watching Kirigakure Charme getting bound by the snakes in Chapter 2, and goes as far as getting caught by them despite being able to avoid them at her speed.

Lugh is a young woman with a modest bust and long white hair tied into a ponytail fashioned a large dark hair clip ornament. However, her most notable feature is her dark eye patch worn over her right eye to allow her to utilize her magic more efficiently.

Her normal attire consists of a black, high-necked, sleeveless unitard worn over by a red off the shoulders kimono with dark hems held together by a yellow obi and white cuffed ankle boots.

Magus Mode: Currently, Lugh has yet to manifest a Magus Mode. 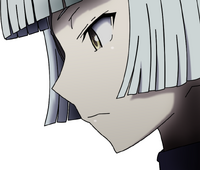 Some time ago, Lugh managed to sneak into the Sky Library and steal three legendary treasures, becoming a Magic King Candidate. She would also eventually join Iscariot where she met Master Liber and Hijiri.

She battled Levi while the other members of the Trinity Seven were at the Royal Liber Academy. When she defeat Levi. When she was bound by Liese, she overloaded her [Virtus Arm] "Light Piercer Brionac." She had to choose between either breaking one of her weapons or continuing being unable to move.

Known as the "God of Light", Lugh is a master of high-speed Ildanach magic from the Invidia Archive, as well as a Demon Lord Candidate. Considering herself as the second strongest person in the world, she was even described by Yui to be stronger than even the Trinity Seven. Ildanach allows her to perform Luminesenc, becoming the "equivalent of light", or moving at the speeds that cannot be tracked by the eye. As such, she is able to evade almost any physical attacks from touching her. Furthermore, her quick reflexes help protect her from ambushes, capable of fending off sudden surprise attacks from Levi and even the Paladin Ayesha. Notably, Lugh intentionally covers one of her eyes to better visualize light one-dimensionally.

Lugh also have the ability to use a magic first and then declare the incantation later. This gives her advantages because she can defend against enemy without time lag for incantation, or attack enemy without them knowing what she will use.

Additionally, Lugh is a very skilled swordsman, able to wield a katana in each hand proficiently during skirmishes. Along with her Ildanach magic, her swordsmanship becomes more difficult to defend against, being able slice through anything at the speed of light, as well as split herself into multiple copies to perform simultaneous strikes instantaneously. Lugh also possesses a considerable amount of strength, able to launch several swift strikes capable of shattering even Yui's magical defense. In team battles, Lugh can carry her partner while moving at high speeds to appear as if they disappeared, which allows them to ambush their opponents at their discretion.[1]

During battles, Lugh usually possesses a calm and collected demeanor, generally able to quickly rationalize her next move in battle. During her fight against Levi, she determined against using a "Last Crest" that risked the user's life was unnecessary as she was a Magic King Candidate. Lugh also possesses a strong sense for treasures, able to detect their locations even if they are hidden.

However, Lugh's Ildanach magic is notably weak against Lieselotte's and Selina's Logos Art magic, particularly the latter's binding spell which can imprint "a single moment of light onto film". Another method that has been proven to be effective against her is trapping her from all directions to prevent her from moving, as demonstrated by Levi's Final Crest hoax, and later her use of threads.

Stolen from the Sky Library, Lugh possesses three legendary treasures, available only to those who have mastered a Thema, which allows her to fulfill the conditions to become a Trinity. Upon summoning the Mythical Armaments, Lugh's speed and power become greatly enhanced. She was able to substantially wound Levi instantly without the latter's realization, as well as forcibly removing Selina's binding spell quite easily. Lugh herself has commented that she can never seem to fully control her strength when in this mode.

However, if any of the armaments become destroyed, Lugh becomes unable to summon then for a while.

This Mode is quite taxing for Lugh after 10 seconds pass all her previous wounds and pain return, spitting out blood and falling unconscious.