Lilith Asami, real name Lilith Azazal is the Trinity Seven of the Luxuria Archive and teacher at the Royal Biblia Academy. During an investigation mission, she discovered the existence of the Demon Lord Candidate Arata Kasuga before introducing him to the world of magic.

Lilith has a very mature and responsible presence compared to most others, often playing the straight man in many situations. As a teacher, she tends to act strict and formal, believing in working hard to reach one's goals, giving her a bit of a reputation as an Ice Queen. However, in spite of her firm attitude, Lilith is also very kind and compassionate, caring deeply for her student and friends. Often times she tends to watch over others and provides guidance to support them. Feeling a sense of sympathy for Arata Kasuga's plight, she becomes willing to demonstrate her magic for him despite previously stating that magic wasn't something one should show off to others. Furthermore, during a battle, she becomes serious and prioritizes other people's safety over her own. When she was captured by her father, Abyss Trinity, in Sky Library, she was much more concerned with Arata's well being.

Lilith is also rather prudish, disliking actions or words of a sexual nature or implication. Usually, she becomes very embarrassed and uncomfortable whenever anything venereal happens. As a result, her research Thema lies within the Luxuria (Lust) archive and people often delight in teasing her, particularly about her body. However, she can get angry if pushed too much, chastising and even becoming violent depending on the situation. Additionally, because of her serious nature, she is often shocked and sometimes disheartened by many of her peer's nonchalant attitudes, occasionally having to force them to become focused. Nevertheless, Lilith enjoys being with her friends, becoming happy when they are all together. She has a deep trust in them, working with each other as a team effectively.

Notably, others have noted that prior to meeting Arata, Lilith was quite cold towards others but has since become friendlier.

In many ways and personality Lilith is exactly like her mother Arles Azazel, most notably her intelligence and that she is the teacher of the school.

Lilith is a young woman with long red hair that reaches down her waist, styled normally with a single strand of her bangs braided, as well as the sides of her hair pulled back and held together with a small basic clip. She is also particularly known for having a very well developed and curvaceous figure. Furthermore, Lilith is rarely never seen without her dark beret, with a few exceptions depending on the situation. Her attire, despite being a teacher, is the school female uniform, almost the same as her students, consisting of a white collared blouse, black jacket, plaid skirt, black thigh-high socks, and penny loafers. However, she wears a necktie instead, and leaves her shirt untucked, with shirttails sticking out below the blazer. When acting as a teacher, she will also wear round glasses as well. Arata has once stated that she is rather stylish.

Magus Mode: In Magus mode, her outfit includes a white, sleeveless collar blouse left untucked, a black tie and elbow length gloves. She also wears a dark short skirt and thigh-high socks, as well as penny loafers. Sometimes, she will also wear her glasses which acts as a targeting system. She also carries a sniper with her along with this mode.

Aeshma: The manifested form of the Luxuria Archive, Lilith's wear simply includes a dark cape with a long collar that barely covers her chest, black elbow-length gloves, and a simple white panty with straps to dark thigh length boots with white cuffs and tips. She can also perform a partial transformation which only summons the cape. 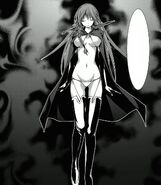 Seventeen years ago, in an alternate ruined world, Lilith was sent by Abyss Trinity (Lilith's father) as an infant to the current world as an experiment to see if he could transfer a Magic King element to different dimensions.

As her memories were modified when she crossed between worlds and time, Lilith would not remember her true origins. Nevertheless, Lilith would live and study at an orphanage until she was scouted by Master Biblia due to her magical abilities. Eventually, she would become the youngest person ever to join the Trinity Seven, as well as join the staff of the Royal Biblia Academy as a teacher.

(This all harsh treatment is probably due to Arles Azazel (her mother) orders to Abyss Trinity at some unknown point, for unknown reasons).

Outer Alchemic Lilith's Thema's are Abies, Fall and Vanitas from the Luxuria Archive, which was her mother's creation, and her branch of magic is Outer Alchemic. Using the theory of equivalent exchange as her basis, Lilith's magic has the ability to transmute materials into different forms. So far, she has only used this to create weapons such as different types of guns. Additionally, her creations cannot be used by anyone but herself. Because Outer Alchemic requires a significant amount of scientific knowledge, Lilith's high intelligence allows her to master the magic, understanding all of the basic history and fundamental concepts from previous researchers. Furthermore, she has also stated that her magic is one of many different versions of alchemy. Outer Alchemic, in particular, requires her to activate a macro consisting of three stages to activate her spells. These stages, each that can be considered it's own separate magic, are:

Lilith has mentioned she gained a new kind of magic after studying the spellbook Apocalypse of Expia, whom was entrusted to her by her mother.