Hijiri Kasuga (春日 聖, Kasuga Hijiri) is a childhood best friend and cousin of Arata Kasuga who disappeared due to a Breakdown Phenomenon after giving the Astil Manuscript to him. She is later on revealed to be a Magus sent by the Royal Liber Academy to observe and eliminate him if necessary and eventually returns as a member of Iscariot.

Hijiri is a cheerful and poised young lady, as well as a strong devotion to those close to her, especially towards Arata Kasuga. Despite having been assigned as his observer, she cares deeply for his well-being, becoming more concerned of his protection than her own, and even willing to entrust Sora to him before she disappeared due to a Breakdown Phenomenon. As suggested by the opposite of her Thema Ruina, Hijiri is concerned more of others and passionately determined to protect her loved ones. After witnessing Arata's future, she became willing to fight the entire world for him, angry and unforgiving of the world using him as a means to its revival. Often saddened by her current situation, she sometimes will have small periods of extreme vulnerability, such as nearly collapsing in tears after Arata promises to bring her back. Nevertheless, she remains incredibly resolute in achieving her goals.

However, Hijiri also has a very cold and ruthless side, willing to go to extremes to accomplish her objectives such as murder or even destroying the world. Surprisingly, she would even attempt to kill Arata and the Trinity Seven, intending to resurrect him after her plans were accomplished. Additionally, she can be quite forceful and intimidating, once almost causing Lieselotte Sherlock to hesitate in her decision to support Arata. In her initial confrontation against Anastasia-L, their tense interactions would greatly frighten Lugh and Anna's companion. During battles, Hijiri displays a calm and calculative attitude, able to confidently attack and defend against enemies. Although, she can be surprised by any unexpected developments.

While sometimes overly serious, Hijiri is usually quite calm and light-hearted, once awkwardly commenting on Arata's perverted antics. Among trusted friends and allies, she is more friendly and approachable.

Hijiri is a young slender young woman with short blue hair and a single ahoge on top of her head. She bares a striking resemblance to Arin Kannazuki, but is far more expressive of her emotions. After disappearing due to a Breakdown Phenomenon, her hair grew noticeably longer but has since returned to her original shortness. Additionally, she also has a small hair clip on the left side of her bangs, but sometimes wears another one on the right side as well.

Prior to vanishing, Hijiri wore a sailor fuku which consisted of a white long sleeved blouse with a sailor collar, a red ribbon tie, a dark pleated skirt, dress socks and penny loafers. After returning as a member of Iscariot, she adorned a short dress under a long sleeve hooded robe, and a hair clip.

Satan: Upon entering this form, Hijiri's hair grows even longer, a crack-like mark appears on her right cheek similar to that of Astral Trinity's, and her hands transform into a large monster like claws. Furthermore, the pupils of her eyes become long and vertical, resembling the pupils of a cat. She also wears a headband, a long dark off-the-shoulder dress worn under a shoulder-less cape held together by a brooch attached to a metallic choker, and a pair of dark slipper shoes. 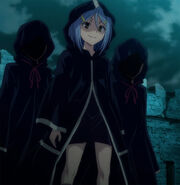 Later on, after challenging and losing of Arata she take on the appearance of a sword.

Arata wielding both Hijiri and Judecca

Despite being born into a family of Magus, and possessing both the Astil Manuscript and Ilias Fragment, Hijiri initially did not realize her lineage. She lived a normal life until she enrolled at her parent's affiliated school, the Royal Liber Academy. There, she discovered that her cousin Arata was a Demon Lord Candidate. At the age of six she was assigned by the Headmaster to monitor Arata and eliminate him if necessary. However, due to the death of his parents in an airplane crash of unknown causes, her family would take him in and the two would live together. Throughout elementary school, when Hijiri secretly protected Arata against demons,  Ilia would pose as her. Although she was already more powerful than her parents, Hijiri was unable to act as a normal girl. Regardless, Arata continued to treat her kindly and she developed feelings for him[1].

During middle school, as Arata developed a perverted side, Hiriji often encountered various embarrassing situations with him. In response she chastised him, increasing his resilience resilience at the same time[1].

One day during high school, Hijiri began hearing rumors of black shadows appearing in town from normal witnesses. Worried over the rumors, she assigned Ilia to impersonate her while she left to school to investigate with Sora. Using her Chaotic Rune to search through the entire city, Hijiri would locate a source of magic at a park, only to witness an ordinary bystander disintegrate into black particles. Analyzing the situation, she would determine if a number of people had already disappeared.

As they traveled around town, they would continue to see more individuals transforming into black particles. After Sora determines that the people disappearing did not possess any magic, she recommends that her master escapes before perishing as well. Although Hijiri remains reluctant to leave, her grimoire warns her that she will be absorbed regardless, as well as being an indirect cause due to her Thema, Ruina,  and connection with Arata the Magic King Candidate whose magic had most likely awakened. Nevertheless, Hijiri remained determined to save Arata at least and begins searching for Ilia's position. However, upon finding the grimoire, she suddenly hears Ilia cry in distress and begins heading to her location. Finding herself under a highway, the Magus discovers Ilia in her book form, as well as a figure emitting powerful magic. Hijiri quickly notices that the figure is actually Arata, but his magic suddenly causes the Breakdown Phenomenon to accelerate and destroy their surroundings. Approaching Arata and taking Ilia, Hijiri then gives Sora to a confused Arata as the situation worsens. After Sora asks her if she is certain, Hijiri confirms her decision, asking the grimoire to her wish and protect him. As the grimoire follows her former master's last command, Hijiri loses her grimoire's protection and begins to disappear. Nevertheless, satisfied with her action, Hijiri leaves a bewildered Arata some last instructions before kissing him, begging him don't forget her. Thereafter, two reach for each other until Hijiri's body envelops into particles of light and vanishes.

After being engulfed, Hijiri would then find herself in an empty world but is nevertheless satisfied. However, before her consciousness fades away, she witnesses a future where Arata and the Trinity Seven had destroyed the entire world. Learning of the world's never-ending cycle of the Magic King and Trinity Seven to destroy the world, Hijiri became unable to forgive the world for treating Arata as nothing but a tool for its reincarnation. Motivated by this feeling, she would join Iscariot in an attempt to destroy and recreate the world into one Arata could enjoy freely.

Hijiri's Themas are Ruina, Partum, and Analysis of the Ira Archive and her branch of magic is Chaotic Rune, which is based on Norse Runes. Hijiri is a very powerful magus, being able to simultaneously contract with more than one legendary grimoire, Astil Manuscript and Ilias Fragment, even before becoming a Magic King Candidate. At a young age, she was already stronger than her parents and fighting against demons. Notably, she once mentioned that she was stronger than Arata, and was even described as Iscariot's trump card to defeat him. As a Chaotic Rune user, she has a tremendous amount of offensive power, as well as a very strong defense. On one occasion, she remained completely unharmed after Lilith attempted a surprise attack on her. Hijiri's Chaotic Rune magic allows her to place multiple runes in different locations as a method to detect any magical activities. She can perform large-scale searches by activating them together at the same time. Furthermore, her rules cannot be erased by those with magical knowledge. If necessary, Hijiri can use her concentrate her magic to jump large distances or hide her to normal people, allowing her to move around secretly. Her physical abilities can also be augmented, such as increasing her speed.

After disappearing by a Breakdown Phenomenon, Hijiri received a Magic King Element from the "Ruined World," becoming a Magic King Candidate. However, as result, she can no longer remain in the world for extended periods of time as her body had been broken down by the Breakdown Phenomenon. At present, she is an existence swaying between space and time, taking on the appearance of a gemstone similar to the Magic King Element whenever she is unable to maintain her form.

While considered as a strong magus, Hijiri's Chaotic Rune magic can be nullified by Arin's Demon Spear Gae Bolg. Furthermore, Mira's Gehenna Scope magic has also been noted to be quite effective against Chaotic Rune as well.

By utilizing her Magic King Element and Trinity status, Hijiri is able to transform to the manifested form of the Ira archive, "Satan", which exceeds the normal Magus Mode. Although, in particular, the transformation itself seems to cause her visible pain. Nevertheless, In this form, she becomes extremely powerful, being able to hold her own against the entire Trinity Seven. Additionally, Hijiri has also demonstrated the ability to break time and space, being able to teleport far distances. She also mentioned that is able to revive someone from the dead using their magic and grimoire, once intending to bring Arata back to life some time later after killing him. Hijiri is capable of forcibly destroying Arin's defensive spells, as well as sabotage her God's Spear Gungir.