Heaven Realm or simply referred to as Heavens (天界 , Tenkai) is the place where the Arbitrators reside. As well as the heavenly people.

The Heaven Realm is a place that can't be reached by ordinary humans or mages. As it is connected to one of the world tree's. It has several places across the earth to reach the Heaven Realm, and some parts are located the opposite side of the earth. However there are unique methods to reach the Heaven Realm, for example Aries since she can teleport (a way to reach the Heavens). Other ways are only the Arbitrators know of, it is shown in Aries case, she can stand on one of Heaven Buildings, and observe the earthly world, from beneath the buildings. Demon Lords aren't allowed to set foot on Heavens, however Arata managed to visit the Heavens. Some of the Buildings are connected or close to earth, as it is shown in case of Aries, Maris and Faunaria simply jumped. However In other area's Maris and Faunaria had to make a quick landing if the distance is far from earth . Though normal mages such as Trinity Seven can't reach the Heaven Realm, they are allowed to if accompanied by a fellow Arbitrator.

The Heaven Realm has always been existed even in the Great Magic War, however heavenly people choose not to interfere, and only the previous Arbitrator who fought Deus Trinity. Since Maris is a survivor of the Great Magic War and the longest Arbitrator ever lived, she has mentioned 'it will be fun as usual' as well as she is the only Arbitrator who knows they have been bestowed an unknown curse. Heaven Realm is the center of all worlds and dimensions. Aries has became an Arbitrator at an unknown time, and was one of the first of the newly Arbitrators to visit Heaven.

Similar to earth, there are days and nights, in night time moons appear all over the realm. Aries has mentioned that simply the Heaven Realm is the foundational world, it's based around all the civilizations in the worlds. This means that all the convenient parts of earth are in Heaven Realm, which makes the place heaven itself. There is also the most important aspect for Arbitrators, which is the Arbitrator headquarters whom they use to attend their meetings.

Once a Trinity Seven is brought to Heaven Realm, they are free to use the buildings to train their abilities as long as they want, however the cost is losing their rank as a Trinity Seven and ascend to a higher level, such as Mira who became a True Hero a power that surpasses her former Trinity Seven. Selina who wasn't even a Trinity Seven at the moment has made progress by her mentor Aries and managed to open the sealed Melancholy door, as well as use it's archive. 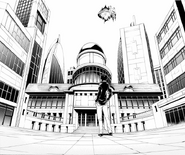