The Black Imperial Sword Judecca is a sentient Demon Lord Weapon originally sealed in the Sky Library before contracting with Arata Kasuga. Since then, Judecca has supported her master and eventualy became one of his primary weapons used in battles.

Upon being released from her seal, Judecca initially behaved similarly to an automated artifical intelligence system. However, after forming a contract with Arata, her responses gradually became more diverse and less robotic. As a Demon Lord Weapon, she will faithfully follow her master's desires and strive to fufill his wishes. In particular, she will even indulge with Arata's perversion.

After taking on her human form, she acts very affectionate and tries to flirt with him. However, she usually ignores all other people except her master.

Judecca's original form is a longsword consisting of a jagged blade with a hook at the tip. Inside the crossguard contains a round gem that stores Judecca's conscience which allows her to communicate with other people. Attached to the pommel of grip is a long skeletal lanyard that can enfold the user's arm for analysis.

After Arata switched his class to Sword Magus, he gained the capability to load spells into Judecca, which transforms her appearance into a gladius with a long blade and triangular hilt containing an orb that displays the character of the Thema stored. Furthermore, depending on the spell, Judecca's appearance will contine to be enhanced based on the nature of the Thema. 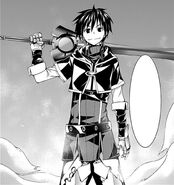 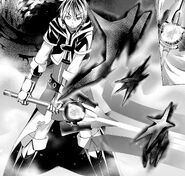 Possessing a human form, Judecca transforms into a young slendar woman with a large busom, dark skin and long white hair, as well as a short pointed ears.

Her main attire consists of a white short one piece dress that exposes her shoulders, back, and hips, opera gloves and thigh boots with neapolitan cuffs.

Later on she takes on an attire of a school girls uniform consisting of a white shirt, dark short skirt and a jacket around her waist.

A long time ago, Judecca was sealed by the Spriggans who would guard the Demon Lord Weapon inside the Sky Library for many years. Even after Abyss Trinity destroyed Akio's hometown, Judecca would continue to slumber within the Library.

Some time later, while struggling against the golem, Arata and Akio are unexpectedly forced back into Judecca's room. They initialy are unaware of the Demon Lord Weapon's presence until Lieselotte warns them after sensing the sword's existence. While Lugh and the rest of the group stall the golem, Arata approaches Judecca whose seal suddenly breaks and falls into his hand. Upon contact, Judecca quickly confirms Arata possesses a Demon Lord Element before analyzing his magic. However, after detecting only his Archive Superbia along with Luxuria and Gula, she states that Arata has not yet achieved the Trinity requirement. As a result, Judecca then begins the process to force the Demon Lord within Arata to awaken. Akio attempts to separate the two, however Judecca easily repels her, forcing the ex-Spriggan to use the camera containing Lieselotte to freeze time.

Within the Frozen World, after noticing his arm has partially transformed into the Demon Lord, Lieselotte comments that even if time has frozen, the transformation slowly continues to progress. Arata then forcibly releases Judecca and returns to normal, much to grimoire's concern.

Later, after Arata successfully masters Lieselotte's Logos Art and returns with her to the real world, he then summons Judecca who confirms that he has mastered the Trinity before deeming him as her master. Next, he questions if she can defeat the golem which she verifies that she can easily destroy the target. Arata begins concentrating while wielding Judecca, causing his magic to disappear for a moment before quietly eliminating the golem. Arata comments that he is finally understanding how to use magic as a result of using Judecca. Afterwards, Lugh tries to touch Judecca, the sword binds the thief and erotically absorbs her magic.

While Abyss Trinity attempts to awaken Lilith's Last Key, Arata surprised the Demon Lord and uses Judecca to force him back. However, Abyss easily recovers from the attack while brandishing the Red Imperial Sword Caina. Arata, with Judecca, and Abyss, with Caina, then begin clashing with one another, causing destruction to their surroundings. As Abyss orders Caina to invoke his "Fall" magic, Arata nevertheless continues to confront the Crimson Demon Lord while his grimoires analyze, despite receiving minor damange. After Sora and Ilia reveal the nature of the "Fall" Thema, Arata commands Judecca to execute Akio's magic, imbuing herself with Mantra Enchant. Disabling Abyss' magic with his anti-magic, Arata manages to force the Demon Lord back with the strengthened Judecca, destroying nearly half of Sky Library. However, after Abyss forcibly awakens the Demon Lord Element within Lilith in order to regain his original strength, Arata and Judecca find themselves eventually ensnared by his magic. Arata and the grimoires decide to use anti-magic to escape, but Judecca states that his chances are quite small, much to his chagrin. Regardless, along with Akio and Lieselott'e support, Arata manages to liberate Lilith from Abyss' control, as well as gain his fourth Archive and transform into the Trinity Form. In his final strike, Arata uses Judecca to destroy both Abyss Trinity and the Sky Library.

After Finding himself in Akio's ruined hometown again, he questions the whereabouts of Judeccca who reveals herself as a small pendant, confirming the destruction of Sky Library as well as the ability to change into any form of his choosing. When he asks the type of girl she can transform into, the Demon Lord Weapon responds "a very bouncy one", much to Arata's happiness and Lilith's displeasure.

In order to master Judecca, the wielder must pass the following conditions[1]:

As such, the only individual in the universe who can currently utilize her is Arata Kasuga. However, if the requirements are not satisfied, she will then initate Berserk Mode to forcibly awaken the Demon Lord within while also repelling anyone else who attempts to interfere until she is released.

Upon successfully forming a contract, Judecca becomes loyal to her master, providing access to her wide variety of abilities:

Additionally, as the embodiment of the Fourth Gate, Judecca can allow her master to surpass the Trinity[1].

After her master relinquished his Demon Lord Element, Judecca could no longer be utilized, temporarily falling under Abyss Trinity's care for awhile. However, Arata later regained the right to wield her after partially merging with the Weapon, allowing access to her abundant resource of magic. Furthermore, upon becoming a Sword Magus, Arata is capable of loading his spells into Judecca to invoke from, causing her form to morph as well.

However, because his magic is capable of overwhelming even grimoires, Judecca must maintain control over her master's strength which can become erratic when Arata becomes irritated. Furthermore, if her master can no longer supply her with magic, she will cancel the fusion and act independently until he recovers. 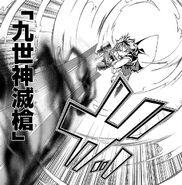 Arata Kasuga
Because only a Demon Lord Candidate with the Imperium Thema can wield her, Arata is the only person in the universe whom she can form a contract with. As such, the two would initially encounter one during Arata's investigation in Sky Library before eventually creating the pact despite not meeting the requirements in the beginning.

Afterwards, in spite of the relative shortness of their contract, the Demon Lord and Weapon quickly formed a cordial and trusting bond. Arata, in particular, would swiftly learn to effectively wield Judecca, becoming capable of holding his own against the Demon Lord Abyss Trinity soon after. As both his weapon and support, Judecca will faithfully execute his orders while also providing her own analysis of the situation simultaneously, as well as suggest best courses of actions during combat. Outside of battle, the two are amiable towards each other while Judecca is even willing to indulge in her master's perversion.