Astral Trinity is the Demon Lord entity residing within Arata Kasuga whose destiny is to destroy the world along with the Trinity Seven .

In comparison to his host Arata, Astral Trinity possesses a cold and ruthless demeanor, normally acting in an assertive manner when dealing the objects of his desire. In one instance, after concluding Mira was worthy of him, the Demon Lord demanded that she submit to him. Additionally, Astral is extremely confidant in his strength that during battles he is willing to display the full extent of his magic than required such as summoning a Breakdown Phenomenon.

Upon transformation, Astral Trinity possesses Arata's body, retaining his main physical features with several alterations such as white hair and pale skin, as well as crack/vein markings that appears under his right eye which follows down to his arm that resembles a claw. Furthermore, his eyes have also changed to silver with white slit pupils.

Astral's attire mainly consists of a dark full body armor with a large cape and boots. During his initial introduction, the Demon Lord also wore a black mask with demonic horns. 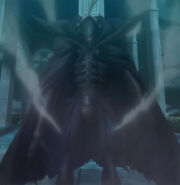 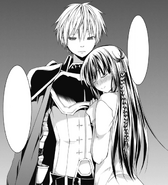 Upon situations of extreme stress, Astral Trinity can gain possession of his host Arata while retaining the latter's Stark Naked Magic magic, as well as inheriting his Thema Imperium from the Superbia Archive. However, under the Demon Lord's influence, he is able to control the magic with more strength and efficiently than the original wielder. Astral is capable of casting his anti-magic ability with simple gestures to defeat two grimoires and Mira, a member of Trinity Seven as well as a specialist in deflecting magic, with overwhelming ease. Furthermore, he can manifest and control a Breakdown Phenomenon on a whim that can destroy a dimension. Arata himself is also aware of the Demon Lord's actions during the possession. Notably, if someone is able to momentarily distract Astral, control can be returned to the original host Arata through the intervention of a grimoire.