The Astil Manuscript or Sora, as affectionately named by Hijiri, is a legendary grimoire said to contain information about another world. Originally belonging to Hijiri, Sora has since contracted with Arata, supporting and protecting him after becoming a magus.

Sora has a very proud and cheerful personality, being enthusiastic in most situations regardless of any dangers. As such, she is quite straightforward and open, unafraid of speaking her thoughts. However, because of this, she can appear spontaneous and audacious, usually making suggestive comments or acting in a risque manner. Nevertheless, Sora is good natured and easy to get along with. In her first meeting with Arin, the two immediately became friendly with each other. Additionally, she can be quite shrewd and mischievous, finding amusement in observing and teasing those around her, especially of her master, Arata whom she enjoys for his upfronts and unpredictability. But despite her easygoing attitude, Sora is highly loyal and reliable to Arata and his friends, willing to fight and support them; although, she can be too lax on certain occasions. In those situations, she can become serious and determined, helping and watching over them numerous times. Nonetheless, Sora will remain obedient and devoted to her master, trusting in their decision and carrying out their requests. Before Hijiri's disappearance, she would follow her last order to grant Arata's last wish. Likewise, during the Royal Biblia school festival, she became suspicious of Anastasia-L, warning Arata of her and waiting for his choice.

Furthermore, Sora is exceptionally confident and proud of her own abilities as a grimoire, commonly proclaiming herself as a genius in spite of not quite understanding the process. Being Arata's grimoire, she has excellent teamwork skills, able to work together with him effectively and efficiently. During battles, she can become more focused, but rarely does she lose her composure. As such, she is still usually light hearted and nonchalant. However, she can sometimes become overconfident and reckless, leaving her open after using powerful attacks. Regardless, Sora is quick to recover to composure and decide on a proper course of action.

Notably, despite being a grimoire, Sora can become embarrassed in certain situations. When Astral Trinity erased her magic as well as stripping her naked, she expressed shock and disbelief that he would actually attack his own grimoire.

Sora's true form is a small, gray ornate book, bounded with chains. However, she has the ability to change her appearance, initially impersonating Hijiri until Arata discovered her deception. Since then, she has mainly used her human form to interact with others.

Human Form: In her usual human form, Sora appears as a young petite woman with long grey-white hair and a large black bow on top of her head. Her attire consists of a black strapless camisole with white stripes connected to a black choker with a metal ring, a red mini skirt with white clothes, black stockings, and brown loafers. Additionally, she also sports black arm sleeves held together with white bands, a black grommet belt, small black belts on both legs with the right one on the upper thigh and left one on her ankle. 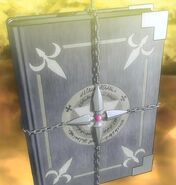 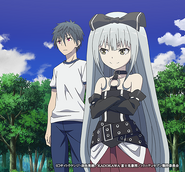 Possessed by Hijiri since her birth, the Astil Manuscript was given the name "Sora" by her master. Together with the Ilias Fragment, their magic would make Hijiri stronger than even her parents. After Hijiri was assigned to observe Arata, Sora would help support her in repelling against demons that were attracted to Arata. Additionally, Hijiri would also sometimes task Sora with impersonating her while she was gone. However, due to her tendency to always attempt seducing Arata, Ilia would eventually become the one usually to disguise herself as Hijiri.

After Hijiri hears rumors of black shadows appearing throughout town, she and Sora leaves high school to investigate while Ilia poses as Hijiri. Using her master's rules, Sora discovers an area with magical activity. However, upon arriving at the location, the two find nothing until they suddenly witness a normal bystander disintegrate into black particles. Analyzing the cause, Sora tells Hijiri the results, as well as additional people disappearing.

Later, the two would continue to encounter the same situation as more people vanished into black shadows. Eventually, Sora determines that those disappearing did not possess any magical abilities, warning a reluctant Hijiri to leave the city or risk being absorbed as well. Sora also reveals that the incidents were most likely caused by Hijiri's connection with Arata as a result of her Thema and his Demon Lord magic awakening. Nevertheless, the grimoire complies with her master's decisions to save Arata at least. However, after Hijiri senses Ilia in distress, the two rushes to her location only to discover a drained Ilia in book form, as well as an unaware Arata whose magic abruptly expedites the Breakdown Phenomenon's destruction. In order to save Arata, Hijiri hands Sora to Arata, although Sora questions her master if she is certain. Hijiri affirms her decision, asking the Sora to grant her wish and save her cousin. Sora assents to her former master's last command, giving her farewell before contracting with confused and unaware Arata. As Hijiri ultimately disappears while Arata remained safe due to her magic, Sora and Arata suddenly find themselves in a void. A desperate and confused Arata then demands Sora to return his normal days, to which the grimoire obeys and creates an alternate world.

As a legendary grimoire said to contain information of another world, Sora has immense magical power, as well as a wide variety of abilities. Some noteworthy magic she has demonstrated are:

However, Sora's most notable trait is that she possesses her own will and thoughts, unlike normal grimoires, allowing her to act independently from her master. As such, she can either support her master by providing her magic to use or separately move on her own to give direct assistance. Nevertheless, Sora usually entrusts her master to make the final decisions. Considered an offensive type grimoire, Sora has a considerable amount of offensive power, easily able to destroy her surrounding and even large groups of enemies in one burst. But after a strong magical attack, she is prone to leaving an opening. She can also give her magic energy to Arata to replenish and augment himself. The magic she provides is even capable of protecting her master from being absorbed during a Breakdown Phenomenon. Her initial master, Hijiri, disappeared as a result of allowing Sora to form a contract with Arata as her magic would no longer sustainable while Arata survived the experience. Additionally, because she is not a biological being, Sora is essentially immortal and has lived a very long time. Notably, Sora's specialty is analysis and invocations.[1]

During her time contracted to Hijiri, Sora would use her magic to support her former master's Chaotic Rune. For example, using rules placed by Hijiri in different locations, Sora can search for magical activities in a large area and project the position to her.

After Arata sacrificed his Demon Lord Factor and magic, Sora can no longer be utilized by her master with the exception of materializing her human form. Nevertheless, she still considers him to be her master. 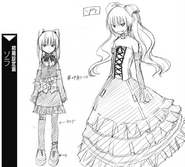