Arsha is a Paladin of the Superbia Archive and headmaster of the Royal Akasha Academy. As the partner of Anastasia-L, she supports her best friend's goal in protecting the world which eventually causes her to come into conflict with Arata Kasuga.

Arsha is a casual and confident young lady, being normally cheerful and friendly towards others, particularly toward her best friend Anna. During high school, she congratulated Anna on becoming a Trinity Seven and offering to treat her for her success. Caring deeply for those close to her, Ayesha would express concern over the potential disappearance of her best friend, becoming relieved after Anna promised her she would not use the spell. Unfortunately, due to the appearance of Lilith, Ayesha would become angered and saddened over Anna's forced displacement. Nevertheless, Ayesha has demonstrated a strong resolve, promising to become a Paladin to support her best friend upon her return in the future. Even from a young age, she was already determined to succeed her mother, the previous headmaster of Akasha, as the next Paladin despite the hardships.

Ayesha has great pride and confidence in her abilities, proclaiming herself as the strongest in the world. She is able to remain calm and composed during battles, being quite perceptive in both normal and rough situations. She was able to quickly recognize Anna's joy from meeting Arata, as well as deduce Akio's awareness of her and conclude that Levi was hiding her strength during the duo's battle against Mira and Lilith. However, she can become easily startled and even frightened from unexpected and tense circumstances, even shout and become flustered. After Arata was unexpectedly defeated in the first round of the Magical Research Showdown, she became unsettled by the sudden derailment of her plans with Anna. Nevertheless, she can be friendly and often praises those with high aptitudes such as Lugh and Akio.

Arsha is a young woman with long hair styled into drill twintails held together by dark ribbons. Additionally, Ayesha also possesses the Phantom Cross Eyes, able to change her pupils to crosses willingly. Despite her youthful appearance, Arsha is apparently older than she appears.

Her usually attire mainly consists of a dark hooded robe and penny loafers.

School Uniform: During her time as a student in the Royal Akarsha Academy, Ayesha's uniform included a a white long sleeved cuffed blazer jacket with a short dark tie, and a dark plaid short skirt. Additionally, she also wore a pair of pantyhose and brown plaid penny loafers.

Magus Mode: Arsha adorns a large royal cape with a fur capelet collar and a metal clasp. Additionally, she also wears a mandarin collared white dress underneath a small bevor, chest armor and a dark vest, as well as metal gauntlets and sabatons. 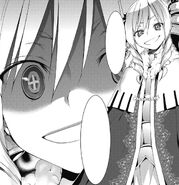 During high school, Arsha was enrolled at the Royal Akarsha Academy with her best friend Anastasia-L.

Seventeen years ago, Arsha congratulated Anna on becoming a Trinity Seven in class. Anna offers to treat Arsha for her support, but Arsha insists that she treat her instead.

Later, as the two are enjoying crepes outside, Arsha voices her concerns over Anna using her Final Crest and disappearing the same way the founder of Anna's Elemental Conductor magic, the Saint of Revival. Anna assures her friend that she will not use the spell, much to Arsha's relief. Arsha then states that she is determined to succeed her mother as the next Paladin, although Anna notes that that will be difficult. Nevertheless, Arsha asks her if she will search for the Demon Lord next, however Anna is unsure due to Arsha's mother, the headmaster of Akarsha, stating that the Demon Lord will destroy the world upon meeting the Trinity Seven. But Arsha declares that the Demon Lord will surely fall in love with Anna and decide to not destroy the world for her, much to her friend's happiness. As Anna yearns to meet the Demon Lord, Arsha comments that she has become a maiden in love despite not yet even encountering him.

Unfortunately, later during the night, a Breakdown Phenomenon suddenly appears at the academy. A worried Arsha finds Anna outside until Anna suddenly collapses and begins to disappear. Anna realizes the situation, explaining that a similar existence to her, a Trinity Seven of the Luxuria archive, had appeared and only one could exist in the world. As a result, Anna is being forced to disappear, but Arsha refuses to accept such a condition. However, Anna also declares that she will protect the world as the Saint of Resurrection by disappearing into the "World of Demise" along with the Breakdown Phenomenon. Arsha is initially hesitant, but Anna promises her friend that she will return before the world is destroyed. Arsha finally accepts Anna's decision, also promising her that she will become a Paladin to help her in the future. After the two friends give their farewells, Arsha watches her best friend performs the Final Crest and vanishes along with the Breakdown Phenomenon, leaving her alone in the academy grounds.

Within in the next seventeen years, Arsha would fufill her goal of becoming the Headmaster of the Royal Akarsha Academy. Additionally, she would also become a Paladin where she released the seal to the Library of Demise and reunited with Anna's spirt. Ana would then request her friend to support her love which the Paladin agreed.

Ayesha's Thema is Arbiter from the Superbia Archive and her branch of magic is Weapon Mastery. Weapon Mastery allows her to temporarily copy an opponent's grimoire, granting her access to grimoire's spells. Unlike Lieselotte who required a Demon Lord Element to steal magic, Ayesha does not have such limitations. As described by Abyss Trinity, Weapon Mastery is a type of magic that uses the entire user's magic form. Most notably, he also mentioned that this magic was the one that gave him the most trouble in his original world.

As a Paladin, Ayesha is currently one of the most powerful Magus in existence, rivaling Master Biblia and even self-proclaiming herself as the strongest in the world. Possibly possessing a large amount of magic, she has demonstrated a wide variety of skills such as stealth, weapon summoning, apparition conjuration, etc. Notably, Ayesha presumably has preserved her body and soul, allowing her to remain young despite her age.

Ayesha also been shown to be quite perceptive, realizing Akio's awareness of her and deduce that Levi was hiding her strength during their Magical Research Showdown fight against Mira and Lilith. As such, she is quite adept at analyzing opponents' weaknesses and developing countermeasures against them. Having attained abilities similar to the Trinity Seven such as the Phantom Cross Eyes, Ayesha has can easily determine her opponent's intentions, such as hiding a trump card. Although, her countermeasures are not always fully effective such as Mira who overcome Ayesha's exploitation of her pure nature. During battles, she is able to remain calm and collected, allowing her to confidently oppose her enemies.

Master Akasha has also demonstrated the ability to capture individuals by sealing them into small crystals. After defeating Akio and Levi, she would take them captive using this method. The Paladin is also capable of creating barriers strong enough to protect against multiple Breakdown Phenomenons.

Master Akasha possesses a set of magic swords called the Eleven Divine Magic Swords of Tiamet. She is capable of summoning the weapon to any location of her choosing, as well as manipulate them to attack her opponents without touching them. Furthermore, she can change the physical state of her swords, such as tranforming them into slime that can devour magical barries and clothes.

Each of the sword commands different Demonic Beast. All of them are based on Mesopotamian mythical beasts.