Arin Kannazuki (神無月 アリン, Kannazuki Arin) is the Trinity Seven of the Ira archive and a user of Chaotic Rune magic, whose appearance is strikingly similar to Arata's childhood friend Hijiri. Furthermore, she is also the Magic King's partner, becoming an early ally and later close friend to Arata.

Arin is quite blase, typically only having a serious or blank expression and rarely showing any other emotions. Because of this, many of her actions and expressions usually do not match. Furthermore, Arin has often been shown to be blunt and lack common sense, generally never reacting the same way most people do in many situations. For example, Arin on one occasion chose to bathe in the male bathroom because she preferred the quiet. Even when Arata discovered her naked by chance, she barely showed any reactions and acted nonchalant despite his presence. Often times, others have to correct and chide her for her behavior, which she usually finds difficult. However, despite her lack of expression, Arin is not quite a cold as she appears to be. In actuality, she can be kind and caring, even if she does not show that often. Arin gets along very well with her friends, caring for their safety and willing to fight for them. She has also been shown to be perceptive, once immediately noticing Mira's change of attitude towards Arata.

Notably, prior to meeting her partner, Arin has been noted to avoid interacting with others in favor of focusing solely on her research. However, since then, others have observed that she is more expressive and social towards those around her. In particular, she has become very devoted to Arata, supporting and protecting him whenever possible. Arin can also act jealous when he interacts with other girls; although, she does not mind him being with the Trinity Seven.

Arin is a petite, slender young woman with short light blue-gray hair and a single horn. Notably, she also bears a striking resemblance to Hijiri Kasuga. However, Arin normally has an emotionless expression, rarely changing her expressions. Although, since meeting with Arata, she has begun to show a wider range of emotions. Her usual outfit consists of her school uniform, a white collared dress shirt worn with a dark blazer jacket with the school emblem, and a plaid mini-skirt. She also sports a plaid cravat bowtie, black knee-length socks, and loafers. On her left ring finger, she wears a simple band ring with rune inscriptions that are seen when activating her magic.

Magus Mode: In her magus mode, Arin switches to a dark one-piece mini dress under a long sleeved hooded robe with white lace trims and tied with a thin red ribbon in a cravat knot. Her socks and shoes remain the same. 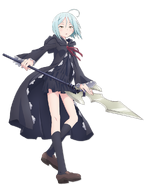 Unable to remember her name and origin, much of Arin's past remains a mystery to even her. Her earliest memory is when she was around eight years old, she was shrouded in darkness before growing conscious of her existence. She would suddenly find herself in an unknown location and become first aware of the world around her, which the experience would cause her to cry. Later, while wandering around, she would meet the Biblia headmaster who told her that he had come to pick her up. Bringing her to the Royal Biblia Academy, the two would encounter unknown monsters that no one else had previously seen before. Although some of those monsters were easily defeated, there were also several that they were forced to flee as suggested by the headmaster despite his Paladin class.

Eventually, she would arrive and enroll at Biblia, as well as becoming a member of Trinity Seven. Notably, during times she left the Academy grounds, the previous unknown monsters would appear again outside the academy.

The first encounter between Arata and Arin would be in the Male's bath, where Arata would mistake her for Hijiri during their initial encounter. It is from then on she would begin to experience emotions that she had never felt before, such as attraction towards him, going as far as stalking him for much of the next day.

Arin's Thema is Ruina from the Ira Archive, and her branch of magic is Chaotic Rune, which is based on the ancient writing style Norse runes. Specifically, Chaotic Rune manifests the power of gods into runes, capable of overpowering Magic King magic once enhanced. Using macros recorded in her grimoire Laguna Yggdrasil, she is able to perform a wide variety of spells both offensively and defensively by drawing symbols with her finger. Additionally, her magic is also considered to be one of the more destructive ones out of the Trinity Seven. In one instance, she was able to forcefully remove the Astil Manuscript's restriction on Arata, causing his power to become unstable.

Upon receiving the Demon Spear Gae Bolg due to her desire to protect Arata, Arin's magic abilities increased even further, even once breaking down time and space to teleport herself. Her offensive abilities, in particular, also further improved, able to outclass melee-types now despite once being only spell oriented.

Chaotic Rune has also been shown to be very compatible with Yui's Arc Symphony. By combining her spells with Yui, her magic is greatly enhanced, to the point of stopping a Magic King Candidates attacks. Furthermore, upon transforming Gae Bolg to God's King Spear Gungir, she can achieve another third of the Trinity. With Yui's Arc Symphony supporting her magic, she gains the Thema Victoria allowing her to complete the Trinity. At this stage, she has a very staggering amount of magic that becomes difficult for her to control.

During battles, Arin usually remains very composed, able to calmly and intelligently fight against her opponent. On rare occasions, she can lose her focus in dangerous situations involving her friends, especially Arata.

Arin is also capable of creating a Breakdown Phenomenon with the same destructive force as Arata's after her magic clashes with Hijiri's. Afterward, she can access the Breakdown Phenomenon's world where she can locate individuals through their magic