Archive Erosion or Archive Delete is a lethal spell that can be used to erode anyone who is connected to an Archive and confine them in black crystals. It takes the shape of a hand, such as big hands mostly, and can be mass produced if the user wishes it to, for it to cover a large areas. It can also be shaped as a sphere to surround others, or chase them. If the mages are connected to their respective Archive, the erosion will quickly attract themselves to them and form black crystals in their body. The more the mage is connected to their Archive, the stronger and faster the erosion will spread on their bodies, and if they use their abilities while connected, the erosion will completely spread on their whole bodies making it severe and confined in black crystals. The user can send a wave of erosion from a far area. It can erode physical weapons as well, such as swords, but a Mythical Armament such as Dáinsleif scythe can't be eroded. If the mage is connected to their Archive and their location is far away, it can attack them by turning into crystals only. Aries has described this is a space-time interference, gravity poles.

The only way to counter this spell is either the user is not connected to an Archive, however they will be defenseless, or if a barrier is set in advance. Even though they won't be erode completely, but they will at least revert back to their original state. If the mage is connected to an Archive and is using half of their power or 1/3 of it they won't completely be confined in black crystal but black crystal parts will be cover their body, however it will eventually confine the mage into black crystal. Arata has found a way to counter it by using a limited Last Crest from three of the Trinity Seven using Levi, Yui and Lieselotte who is another dimension separated from the erosion. Allowing them to connect to their Archive, since those who is in another dimension are completely immune and safe.

The only known mage who is immune to this spell is Faunaria Road due to her being a cursed child. 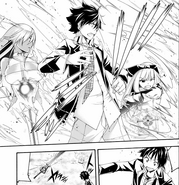 The effect of the erosion reverts Arata, Astil and Judeeca into their original state. 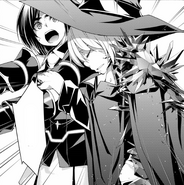 Maris half covered with black crystals. 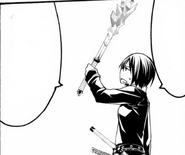 Murakumo sword eroded upon making contact with Aryan while connected. 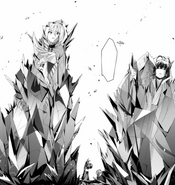 Aetheria and Harukage being confined into black crystals after using their techniques while connected.
Community content is available under CC-BY-SA unless otherwise noted.
Advertisement