Arbitrators or the Heavenly Arbitrators are group of mages with unique abilities, and each one possess their own attribute. All of them possess higher class magic than a Paladin. Respectively, It consists of pillars that each member stand on, which has a mark of what is their Sacred Chest. There are only three free pillars for candidates. Unlike the Trinity Seven, they don't possess a Grimoire, nor a Thema or an Archive to connect to. Since Arbitrators are those who at the pinnacle level and who can connect to the Clouds, which represent the eight cardinal sins and the four cardinal virtues. Something on a higher level and more ancient than "Archive". According to Master Biblia, if there is a missing Arbitrator, they can be replaced by another, though they must meet the requirements.

The Arbitrators existed for a long time and years as they continue on new generations after they pass away, which they represent the old generations. During the old generations, Deus Trinity who were at that time unable to recognize and know love, so therefore it was always right for him to be devoted and be victorious. Deus Trinity rebelled against the Heavenly Arbitrators but he was defeated by them and thrown to the world of the humans. However Deus Trinity never gave up, wanting revenge on them, so in order to do so he challenged all the Arbitrators proposing which started the first Great Magic War in the human world. Some time after his resurrection he planned to challenge the Heavenly Arbitrators again whom took everything from him.

Many years have passed in the present times, Aries Cardia has became an Arbitrator, as well as 8 others who were the current Arbitrators. It was then decided the one with the most authority and power will become the Arbitrator leader.

However a single problem arose when one Arbitrator never showed up whom was a prodigy with extreme intellect and became one at an early age, causing the Arbitrators to find another suitable candidate much to their dismay.

Later, the former missing Arbitrator, Arles Azazel, is revealed that she is making preparations to defeat the Goddess of Darkness, and has already started researching a way to kill Gods. At that time, she created a special spell called Black Azazel, which is very effective on Arbitrators and their only weakness. As it would be used in case there is a rebel between the Arbitrators. Later Master Liber and Hijri got a hold of the spell.

Due to the Archive Melancholy being lost during the Great Magic War and vanished, and no one was able to connect to it yet, which concerned the Arbitrators. They needed someone who can connect to the Melancholy Archive.

According to Maris Stella the Arbitrators have been bestowed upon them an unknown curse.

On the outside it has numerous buildings which each one has the same buildings and rooms for the Arbitrators. For example it has what the Arbitrator wants, such as taking breaks from missions. The tower to the headquarters can always be seen from all outside buildings. These buildings are very handy for them.

According to Aries the Heaven realm is the foundational world. It's based around all of the civilizations in the world.

When an Arbitrator enters the headquarter door from bottom, their respective pillars automatically descends to them similar to how elevator functions. 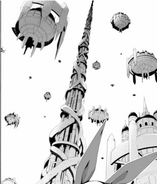 One of the buildings outlook

Inside the Arbirtrator Headquarter tower

Outside of the top Headquater tower building

Arbitrators duty is to maintain the balance of the world and eliminate threats that would disrupt the society using their wide information network with their abilities. They would even sacrifice one of their own to stop calamities from happening. However not all Arbitrators agree with each other, as Master Liber was in the way of both Maris and Faunaria, who were on the way to eliminate Arata. Though Master Liber only approached them out of curiosity, advising them to simply wait.

They can split in groups and perform tasks, such as the current one, to prevent the resurrections of the Goddess of Darkness. The Arbitrators have split into groups or sometimes solo.

To become an Arbitrator, the mage must have incredible magic power inside them. They must achieve their own Sacred Chest as well as attribute via their own will or by extensive training.

Paladin class mages can become one easily, hence their massive magic power, yet becoming one isn't very easy but their process is much faster than normal mages. Some Paladins can become an Arbitrator without doing anything or training if accepted. Famous Paladin such as Master Biblia and Master Liber are qualified as an Arbitrator. All Arbitrators are above Paladin Mages

To achieve the rank of an Arbitrator is also completely rare, since they can use abilities according to their attribute willingly, without the use of any kind of Grimoires, however they do have a unique Thema's that an Arbitrator use from what they have "Sacred Chest" and they connect it to their corresponding "attribute" instead of Archive.

A Trinity Seven is capable of becoming an Arbitrator, though they must perfect their own abilities to the limit, as well the chance is very rare and nearly impossible, but they can be chosen as a substitute if their is a missing Arbitrator or if one wishes to retire, even so the chance is still rare if not unacceptable. Candidates can become one, and their Sacred Chest and their seat can be prepared.

On each Pillar there are symbol shape images which Arbitrator Sacred Chest or Ark. Some Arbitrators design their Pillars as they please, such as Harukage designed her Pillar by an umbrella, as well as a kettle on the side. With the umbrella rains down cherry blossoms. Murakumo's Pillar has many swords drilled into it, and Maris Pillar is filled with books. However some Arbitrators choose not to design them and have a normal Pillar.

The Decision symbol in the shape of a Scale.

The Heavenly symbol in the shape of Virgo.

There are some Arbitrators who prefers to work together, and some who prefer solo in missions. This action sometimes depend on their history with each other, or their own attitude.

After all candidates become former Arbitrators, the mission to eliminate the Gods commence.

All the Arbitrators save for Faunaria Road have been defeated by the Goddess of Darkness confining them in black crystals. However Maris decided to sacrifice herself by destroying her core, creating a massive explosion in attempt to defeat the Goddess. Even so the Goddess survived the explosion. The Goddess found Murakumo a fascinating Arbitrator subject, so The Goddess used a trap against the latter to trap her inside one of her underlings to use. The Goddess then spared Faunaria, Selina and Mira from death, after defeating their only hope left which was Arata and the co. However she did give them a choice to either wound up as they are or become one with her.

Rise of the evil Goddess

After the defeat of the Arbitrators at the hands of Aryan, she used her subordinates to possess the Arbitrators and take control of the body. The only exception of the ones who wasn't transformed into an evil goddess are both Harukage and Altana. Hence the latter is revealed to be both under the goddess control and have control of themselves. Aries became an evil goddess of space-time. Murakumo is still trapped under Revana control. It is also revealed that Aetheria, Maris and Master Liber are under the goddess influence, but are yet to reveal their form as an evil goddess.