Akio Fudo is the Trinity Seven of the Gula Archive and third seat of Grimoire Security. As the partner of Mira, Akio was originally an enemy of Arata, but has since become his friend and ally.

Akio is a friendly, cheerful young woman, almost always enjoying the moment in any situation. Easy going and confident, she is generally easy to get along with, and very optimistic in even the most dangerous circumstances. Rarely becoming overly serious with a few exceptions, Akio, for the most part, will act light heartedly and very accepting of others, being cordial to even most of her enemies. Even when visiting her former destroyed hometown, she remained composed. For example, despite being a member of Grimoire Security, Akio would treat Arata amicably even though he was a Magic King Candidate. Akio enjoys being with her friends, teasing and bantering with them regardless of the topic or their positions. She is highly loyal and caring, willing to fight to protect them. Additionally, Akio tends to be the older sister figure to her friends, watching over and supporting them. She would greatly influence Mira to accept her powers, and help teach Arata her magic to help him defeat Lieselotte. Also, Akio is surprisingly quite pure, becoming embarrassed when she loses her clothes despite not being shy.

Furthermore, Akio enjoys battles, becoming excited at the prospect of fighting strong opponents such as Levi, which is similar to Murakumo's hunger for battle. As a result, she is sometimes called a battle maniac by her friends, which she happily accepts due to the nature of her research. One of the few situations where she will get serious, being very confident in her power and chiefly levelheaded during fights. She is also very cooperative, trusting them and able to work together as a team. As the partner of Mira, she seldom disobeys orders and believes in her judgments. Other times she will become stern is when the people she cares about is hurt or in danger. Upon meeting Abyss Trinity, she would learn that he was the one who killed her mother and destroyed her hometown. After hearing of his deed, Akio would become incredibly angry and attack him immediately, the only time she has become truly furious. She is willing to do anything to protect her friends, even once suggesting killing Arata in his sleep to stop him from becoming Astral Trinity again. Although, she would immediately admit that she was not entirely serious.

Nonetheless, even with her tragic background, Akio continues to be caring and carefree. After Arata defeated Abyss Trinity, she would once again meet her mother who was always protecting, breaking down in tears and finally resolving her past. Since then, she may have developed feelings for him and calling him her beloved.

In the past, she was very pious, but after her hometown was destroyed she lost her faith which is why her research Thema is Fides (faith).

Akio is a tall, long-legged, slender young woman who is almost always smiling due to her cheerful and friendly nature. She has a modest bust and long dark hair that covers her entire back.

On the right side of her head, a small red ribbon is tied to several strands of her hair. For her normal attire, Akio wears a white long sleeved button-up shirt that exposes her cleavage, stomach and navel, a long dark skirt with double slits revealing the both sides of her legs and a pair of dark slip-on shoes.

During her team battle against Mira and Lilith, Akio is revealed to always be in her magus mode due to being a battle magus.

Some time after Arata departed to train at the Royal Akasha Academy, Akio removed the small ribbon and began adorning a ponytail with a longer one.

Spriggin Form: Upon using too much of her magic, Akio reverts back to her child spriggin appearance. In this form, her body becomes more slender and her height greatly shrinks. Her outfit consists of a dark nun habit worn under a white scapular, a dark mini-skirt with a sheer overlay, white cuff socks, and dark dress shoes. On top of her head, she also wears a white coif and black veil on top of her head. Lastly, Akio adorns a simple cross necklace. In the movie, Akio called this ''empty stomach mode'' 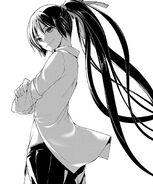 During her childhood, Akio and her mother lived in a town that rested underneath the Sky Library. Her father had passed away due to an illness long before. As spriggans, protectors of ruins and fortresses that contain legendary treasure, they guarded the legendary weapons stored in Sky Library. However, one day while walking through town, Akio would witness her town suddenly get annihilated while she remained unharmed. Abyss Trinity, a Magic King from an alternate world summoned by the spriggans to defeat their worlds' Magic King, would acquire the Red Imperial Sword Caina. In a fit of boredom and curiosity, Abyss would use the weapon to destroy Akio's hometown. Her mother, who had sufficient power to save only one person, saved Akio from Abyss's attack, making her the only survivor.

Some time later, Akio would become a magus and enroll at the Royal Biblia Academy where she would join the Trinity Seven. Subsequently, she would meet Mira, who was very shy and became isolated due to her strong magical powers. Befriending her and taking her hand, Akio would drag Mira everywhere, exposing her to a diverse experience. On one occasion, Akio would find Mira fainted from a failed experiment and carried her on her back. After awakening, Akio would inspire Mira to use her immense power to change herself. Eventually, Mira would also join Trinity Seven and together they would become part of Grimoire Security.

As part of a Grimoire Security mission, Lieselotte, along with Mira and Akio, travel to an average rural city in America to investigate a potential Breakdown Phenomenon. Despite their initial investigation yielding no results, they are assaulted at midnight in their hotel room by the locals who have become living corpses. However, the girls easily repel their onslaught, as well as discover that a Gula Breakdown Phenomenon, much to Akio's displeasure, which occurs after midnight is the cause. Locating the source to an abandoned church, they find an undead sister continuously praying and casting a spell, causing the Breakdown Phenomenon. After Mira vanquishes the sister, Akio consoles Mira of her worries before the three begin heading back home.

Akio's Thema is Fides and her branch of magic is Mantra Enchant from the Gula Archive, which stores magic on a portion of her body in the form of characters, greatly enhancing her physical abilities. In order to use Mantra Enchant, Akio must first charge her magic with "significance", the most important factor of her magic. In other words, her feelings and particularly her determination greatly impacts the power of her magic. However, if her determination is weak, she will take massive damage instead. But because of her tragic past, Akio's determination and faith has greatly influenced her will, even inspiring Arata's resolve after he copied her magic. Notably, the main source of Akio's strength is her deceased mother's desire to protect her, passed down to her after the destruction of her hometown.

Akio mostly applies her Mantra Enchant to create characters on her legs which greatly increase the strength of her kicks. As a result, her kicks become incredibly destructive depending on the level of control she chooses. From being able to knock someone into the air or annihilating a person and surroundings in one blow, she even has the ability to destroy the space around her as well. Additionally, her jumping power also increases, able to spring superhuman distances. Furthermore, even when she loses some of her magic, her power levels is still quite high, once creating a small crater just by stomping on the ground. Notably, her goal is to reach the level of the founder of Mantra Enchant, Saekino Mao, who could do the same feat without magic. Other parts of her body she has placed characters is her forehead, which greatly toughens her body and increases her defense from attacks. She has also placed one on the back of her hand, which allows her to transfer knowledge to another user of Mantra Enchant, allowing them to see glimpses of her past.

As a battle magus, Akio usually maintains her magic consumption at zero, releasing it all at once while attacking and defending.

Even without her magic, Akio is still quite physically adept and well trained in taijutsu. Her natural strength and flexibility allow her to different kicks techniques from various positions, while her agility helps her avoid many opponent attacks. In her team battle against Lilith and Mira, she was able to dodge onslaughts of gunfire without magic using purely her speed and martial arts. Against her fight with Murakumo, a fellow and a strong Arbitrator, she was able to hold her own. Additionally, Akio also has a strong mentality, remaining calm and collected despite being in dire circumstances. Rarely does she panic or lose herself, which helps her calmly think through situations in bad situations. During the Magical Research Showdown, Akio was able to sense the presence of Master Akasha, and instructed Levi to limit her strength in order to confront her later. Currently, Akio's magical abilities are high enough to allow her to clearly see Master Akasha's grimoire, Einsef Or.

However, if Akio consumes a large amount of her magic, both willingly or involuntarily, her body shrinks to her child Spriggan form until she is able recover. Because of her shortened legs, she is only able to create smaller and fewer characters As such, Akio is unable to perform any complex spells, but can generate more power in her attacks.

Akio later receives a whip as a weapon with a spear head, that helps her further in battle.