Abyss Trinity is the Crimson Magic King, and the Magic King of Luxuria. He is Lilith Azazel's father. Later on, after the destruction of his physical body by Arata's hands, he lives on as a spiritual manifestation of the Magic King Weapon he wielded prior to his death: Caina, however as a result he lost all of his power as a Magic King.

Like Astral Trinity who displays a Thema suited for his personality by dominating and controlling his surroundings, Abyss Trinity seems to embody his Thema by his sheer willingness to inflict needless destruction. He destroyed Akio's village, despite their welcoming him, for no other reason than to test his power and kill some time, in short, he was bored.

He is a being devoid of lust, and admits that creating a daughter, Lilith, was an act committed for the sake of his plan's greater purposes and that it even betrayed his own nature.

He is not above playing along with Arata and his group's antics to a degree, even jokingly calling Arata "Kouhai" when the latter called him "Senpai" (all in reference to the fact that Abyss is a much more experienced Magic King than Arata). He even seems impressed by his daughter, Lilith, and Arata's own development as Trinity Seven and Magic King respectively. However, this is only because the former of the two is necessary for his plans while the latter is treated by him as an amusing game, at least until Arata becomes a nuisance to him and even surpasses and destroys him, that is.

He loathes being a pawn to fate, and chose to rebel against the system of destruction and re-creation in his own way by creating Lilith, his tool to destroy Arata's world alongside his own.

Arata considers him a lonely individual, this is clarified by his nature being that of an all-consuming lust for destruction, he slaughtered his own Trinity Seven, and presumably his entire world, and even treats his own daughter as nothing but a tool (though admittedly, he created her to be nothing but a tool anyway, so this is to be expected). Even he seems to realize, at his final moment, that this is why he ultimately lost to Arata, who had the aid of his Trinity Seven, Grimoire's and Rouge backing him up.

After his defeat, and the resulting destruction of his physical body, Abyss gave up his power as a Magic King to live on through Caina and watch over his daughter Lilith, this is explained to be a result of Akio's Mantra Enchantment, which was filled with her mother's love when it was used by Arata to kill him, meaning the affection of a parent was literally forced into Abyss upon his death.

He later enjoys company with his daughter Lilith and sometimes train her.

When he was back in high school he was lonely and others avoided him due to him being a Demon lord Candidate, this didn't bother him, with the exception of Arles Azazel whom she found him interesting. When he was with her, he has shown a caring side, and even helped her with her inventions. He found her very genius for such a young age.

Abyss Trinity looks a lot like Arata Kasuga/Astral Trinity. He possess a typical Magic King appearance such as having cape, claw-like right arm, a scar/crack over the face which was cursed upon him by Arles Azazel. When he first appeared, he wore a hood on his head. His clothes have horn coming around the neck area. He has his scar on his left eye which crosses over it. 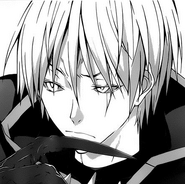 When he was back in high school, he wasn't named Abyss Trinity but others did only called him Demon King Candidate. He was isolated from others because of this reason and would they would avoid him. Being hated by everyone with the exception of Arles Azazel whom she called herself Arumi Asami at that time. They were together for a long time. Later he encountered the Trinity Seven, as all Magic Kings are fated to, now named Abyss Trinity. The both of them would eventually love each other giving birth to the newly born Lilith Azazel, he then sent her to alternate world by Arles orders for unknown reasons.

After the destruction of his world was complete, he chose to rebel against the system by spreading his destruction to other worlds, thus, when he was summoned by the spriggans long ago to kill Arata, the Magic King Candidate of one such world, he began to plot to have his full power restored in the new world so he could destroy it too. His daughter, Lilith, was created and sent to Arata's world for this purpose, mainly, to become a bridge to link the two worlds Later on he destroyed the town below the Sky Library, where he was bound, and everything in a 100km radius, out of sheer boredom. If anything, he was simply testing to see if he could also wield the magic king weapons of this world.

He first appears when Arata's group enter the Sky Library and reveals that his goal is to use the last key that Lilith possesses to open the gate of worlds, to regain his true power from his own world and rule this world as its magic king, more specifically however, what he longs for is to destroy the world rather than rule it. He eventually succeeds in opening the gate to his world and regaining his full powers, but is defeated by Arata using his Trinity Form.

He later re-appears during the magician's tournament, after Arata and Liese's defeat in the very first match, greeting his "Kouhai" and "Daughter" Arata and Lilith respectively.

Abyss' primary Thema centers around all consuming darkness and can return all of creation to nothing, including all seven Archives and the foundations of Magic itself. So far, Abyss has shown the ability to use this in the form of bindings, which very likely would've destroyed Akio if she hadn't been saved, and in the form of darkness itself, which consumes and destroys everything in its path. He notes that this magic can give one a taste of true Nihility, which reflects the concept of erasing others.